Microsoft made quite an important acquisition starting 2016, Xamarin, which reveals the strategic direction the Redmond Giant is taking and how it intends to capitalize on the cross–platform application development concept to materialize its vision!

What is that strategy? Well, Microsoft has created strong versions of Office running on Android, iOS and Windows 10 Mobile, and moreover, it comes up with its Cloud Services, from Office 365 to Azure, presented as a platform for any mobile client rather than just Windows.

Windows 10 is supposed to take us in the era of the Universal Windows Platform (UWP), where developers can write but one application and run it on all devices; IoT, Smartphones, Xbox consoles, Tablets, PCs, etc.

So with Xamarin, all of a sudden, the Microsoft can be attractive to more that just .Net / Windows developers but also to iOS and Android developers.

The benefits of XAMARIN

Xamarin is the most recent upgrade of Mono,[4] Mono for Android and MonoTouch which are cross-platform implementations of Common Language Infrastructure (CLI) and Common Language Specifications (often called Microsoft .NET).

Xamarin pretends to be the only IDE enabling native Android, iOS and Windows apps development within Microsoft Visual Studio,[36] thanks to a C#-shared codebase across multiple platforms.[5]

Some may say, first to stabilise Visual Studio (for those who had doubts) but also maybe more so to compensate for the bad performance of Windows Phone (Mobile) in terms of market by gaining access to the Android and iOS markets; which is a powerful incentive for application developers evolving around the Microsoft .Net environment.

While UWP is showing a certain success and gaining momentum in terms of growth with the developers’ community among enterprises, the Xamarin tools will definitely attract the consumer-oriented developers, we’re talking iOS and Android here.

Xamarin has more than 1,3 million developers and 15,000 customers in 120 countries, including more than one hundred Fortune 500 companies such as Alaska Airlines, Coca-Cola Bottling, Thermo Fisher, Honeywell, JetBlue and gaming companies like SuperGiant Games and Gummy Drop. (Microsoft Blog, Februray 2016)

In short, that’s a huge new market for both Microsoft and its plethora of developers.

Head in the Clouds…

Xamarin opens up even more opportunities for developers to create their mobile apps on all platforms within Visual Studio, by using such integrated tools like Azure-hosted Databases… because, it has to be mentioned, Xamarin experts have assisted Microsoft Azure Team in developing Cloud Services for iOS and Android Applications back-end Management (such as Push Notifications, Apps Access, etc.); these are Azure Mobile Services for Xamarin.

…and both feet on the ground!

Microsoft is targeting not only universal applications for Windows but also, iOS and Android.

With today’s acquisition announcement we will be taking this work much further to make our world class developer tools and services even better with deeper integration and seamless mobile app dev experiences. The combination of Xamarin, Visual Studio, Visual Studio Team Services, and Azure provides a complete mobile app dev solution that provides everything you need to develop, test, deliver and instrument mobile apps for every device.

Although, Xamarin is an excellent cross-platform proposition for developing native quality performing apps on Microsoft technologies; it’s much more that that.

You may consider that Xamarin’s rivals use mobile web technologies to deliver their solutions, which implies a lost in performance compared to coding in the platform’s native language. Xamarin’s code is compiled into native code for each platform using their tools rather than being interpreted; in short, it’s much faster, matching and sometimes beating the native languages. Here is an excellent independent test performed by Harry Cheung (ex-Google) which places Xamarin above Objective-C on iOS for performance (but below Swift) and above Java on Android. 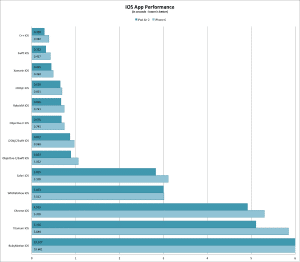 Xamarin also provides an incredibly powerful Test Cloud Service for developers on all platforms which allow for automated testing on almost every device imaginable with one deployment.

At the end of the day, the new business offering hidden behind this acquisition is this: by developing applications with Microsoft tools (Xamarin, UWP, Windows 10, Visual Studio), you will gain access to new business opportunities, meaning all platforms.

But what if, Microsoft was in fact looking way much further than that, contemplating a true universal vision; what if this acquisition is the first step towards a true Universal Application Development Platform?