Mobile Worker, it’s time for Tablet Rasa and on the road you go!

You are a mobile worker and you have just got yourself the brand new iPad2 and it’s killing you… you just feel like not bringing your laptop on your next business trip or client meeting.  Now, is this a good idea?

Only 4-5 years back; I would have answered this: tell me about your IT systems and I’ll tell you how things will turn out because at the time, most mobile workers were greatly depending on the « back-end office » to do business; and then came the BlackBerry which enabled real-time business and conversation with the Clientele and afterwards, new Smartphone devices with stock and calculus and synchronization and display capabilities have made us all almost fully autonomous in terms of Mobility, but let’s be honest, it’s still not a laptop!

So what’s new with Tablets, really?  Well, many things but maybe first and foremost they are the best mid-term between working / display surface and easiness of transportation!!!  I don’t want to provide free advertising but the new iPad 2 is only 8,8 mm thick for a weight of 601 g, it can hold into your hands but with a display screen far more superior than that of a Smartphone.

And with a touch-screen tablet, iOS and Android that is (and a few others…), everything becomes so instinctive: launching an application, surfing the Web, consulting your emails, watching a movie or reading a book; it’s almost child play. Having doubts, take a look at this picture!!!

And then came the Cloud!

In fact, maybe the success of tablets is due to their timing on the technology market which was just perfect; just right after the arrival of massive Cloud service offerings (Amazon, Google, RackSpace, Microsoft, etc.).  It doesn’t look like much but the fact is, there’s a new paradigm now in place; enterprises’ business processes can now exist on the Cloud (applications, data, portals, etc.) and feed any device or mobile worker anytime, anywhere.  Just for you to know, there’s  now more than 4 millions enterprises on GoogleApps !!!

So, one can ask the question again: tell me about your IT systems and I’ll tell you how you’ll do.  Evidently, if your enterprise is on the Cloud; then, your tablet can become your best friend and forget about laptop, desktop, hardtop! 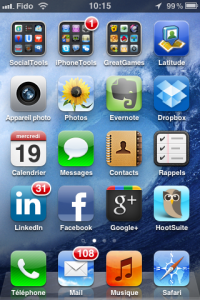 But even if your enterprise is not on the Cloud, you could be there and enjoy the full benefits of the Cloud with such key services providing quite a lot of autonomy as Evernote, Dropbox, GoogleApps, your Social Networks (LinkedIn, Facebook, Twitter, etc.) and maybe « DocumentsToGo » and a few other cherry-picked applications that will make you fully operational in terms of communications, production and business development.  So let’s review those free and essential tools any mobile worker should have on his/her tablet:

– Evernote enables taking audio-text-video notes on-the-go and synchronises them in real-time through the web with any other devices it’s been installed on (tablet, smartphone, laptop, desktop, etc.);

– Dropbox enables asynchronization of any document with any other devices it’s been installed on (tablet, smartphone, laptop, desktop, etc.);

– DocumentsToGo to edit any document on-the-go (Word, PowerPoint, Excel, PDF) on your Tablet;

– GoogleApps enables real-time access and synchronization with email, calendars, contacts and notes on your Tablet.

So equipped, there are now very few things you could not do on-the-go with your iPad2 or your Samsung Galaxy SII tablet.  And if you think you would not be comfortable; think again!!!

Let’s see what you got!

And just in case, you would have any questions regarding today’s tablet capabilities, even though it really doesn’t matter if your enterprise is on the Cloud…, so let’s take a closer look at the most popular tablet today, the iPad2, and answer that question once and for all.

Processor – A5 dual-core processor, both running at 1-GHz, against only one 1-Ghz processor on the iPhone 4.  Multitasking is very fluid and apps are loaded in no time.

Connectivity – Wi-Fi and 3G; each iPad integrates the most advanced wireless technology: 802.11n.

Business / Communications – Video Mirroring helps your iPad (thanks to adapters) turning your HD television or your projector into a giant iPad to watch apps, web pages, presentations, videos, films or pictures with anybody, anywhere.

iOS 5 / iCloud – more than 200 new functionalities and a design, well…  And if you are still wondering about the choice of a tablet; this article does a very comprehensive analysis.

Welcome to the planet Tablet 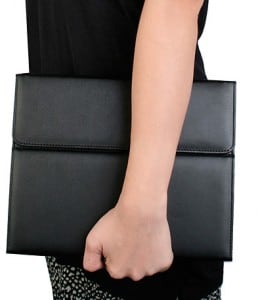 IDC estimates at 44.6 millions the number of tablets used around the world in 2011 and Gartner estimates 208 millions tablets will have been sold by 2014.  « This growth rate is 4 times superior to that of Smartphones, and five times that of PCs », an analyst from the PRTM consulting society was telling Le Monde.

100 millions. This is the number of iPad books downloaded through the iBooks service.

We are maybe witnessing a more profound behaviour change with the advent of the Tablets.  On a Tablet, documents and applications or not only contents that we open to work with and shut down afterwards anymore; they have become with which we interact in ways that are becoming increasingly creative.  And those objects have become portals, but also to new universes of creativity.

And if you want to know more about Tablets; go to Mobiz, the Quebec Mobile Congress, where you can read Érika Roberts, from Transcontinental interactif,  « first iPad usage study in Quebec »…  in French, though.

Have a good weekend,

Our Blog post – Mobile Worker, it’s time for Tablet Rasa and on the road you go! @Analystik http://t.co/s8kmn7JZ #fb #in #tablets #iPad2

Our Blog post – Mobile Worker, it’s time for Tablet Rasa and on the road you go! @Analystik http://t.co/s8kmn7JZ #fb #in #tablets #iPad2